An evaluation of qualitative data is required to measure the outcome and performance of publishing OD. We have already identified the marginal benefits as:

We can also determine some marginal costs from publishing OD which include time spent analysing and publishing data. Some citizen groups and media outlets believe that the release of government information could be misinterpreted and the time spent on unwanted data can be wasteful on government resources. This perspective is influenced by the inherent difficulty of determining the value of data prior to its publication and aggregation. 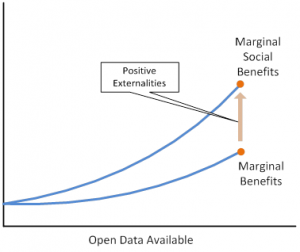 Nevertheless based on the sample of the survey, not publishing OD would have an impact on the most common users, the academic community. They would lose the most from limited access to data. These users possess skills and knowledge for analysis and combining data; not having access to OD would hinder research and development, which in turn would negatively impact future innovation, the release of new products and services, and potential economic benefits. In the 1980s, Canada witnessed such negative impact when Statistics Canada charged the public a fee for data. At the time, the pervading opinion was that the cost of producing powerful data had to be recovered, and that this was best accomplished by charting the user. Canadian research questions went unanswered as some researchers were forced to turn to US or European while and other researchers gave up using these types of data altogether “causing a decade of lost capacity in quantitative expertise.”